So it shall be, while My glory passes by, that I will put you in the cleft of the rock, and will cover you with My hand while I pass by. ~ Exodus 33:32

Bouncing back — that is a quality to be cultivated because life is full of struggles. How do we become resilient? Unsinkable? Joyful amid the blows and burdens of life? This hymn tells us:

A wonderful Savior is Jesus my Lord, He taketh my burden away; He holdeth me up, and I shall not be moved, He giveth me strenth as my day.

This hymn by Fanny Crosby explains the author’s life. During her ninety-five years, Fanny faced three incredible hardships. The first was her blindness, caused by a careless doctor when she was only six weeks of age.

The second was a less-than-ideal marriage. Fanny was teaching at the New York Institute for the Blind when a young musician named Alexander Van Alstyne joined the faculty. Fanny later recalled, “After hearing several of my poems, he became deeply interested in my work; and I after listening to his sweet strains of music became interested in him. Thus we soon grew to be very much concerned for each other…Love met love, and all the world was changed. We were no longer blind, for the light of love showed us where the lilies bloomed.” The two were married on March 5, 1858. No one knows what happened, but years later the two drifted apart and in the end occupied separate addresses.

Fanny’s deepest blow was the loss of her child. To this day, no one knows if it was a boy or a girl. Fanny seldom spoke of the infant. The child’s death seems to have devastated her, and she privately bore the sadness all her life.

Yet all who knew Fanny Crosby spoke of her energy, her zest for life, her joy. One biographer said, “Even in extreme old age, she would tire out people twenty or thirty years her junior.”

She said, “How long am I going to travel and lecture? Always! There is nothing that could induce me to abandon my work. It means nothing to be eighty-four years of age because I am still young! What is the use of growing old? People grow old because they are not cheerful, and cheerfulness is one of the greatest accomplishments in the world!”

Fanny Crosby lived out her song every day of her life: “He hideth my soul in the depths of His love, and covers me there with His hand.”

_Then Sings My Soul (Special Edition) by Robert J. Morgan 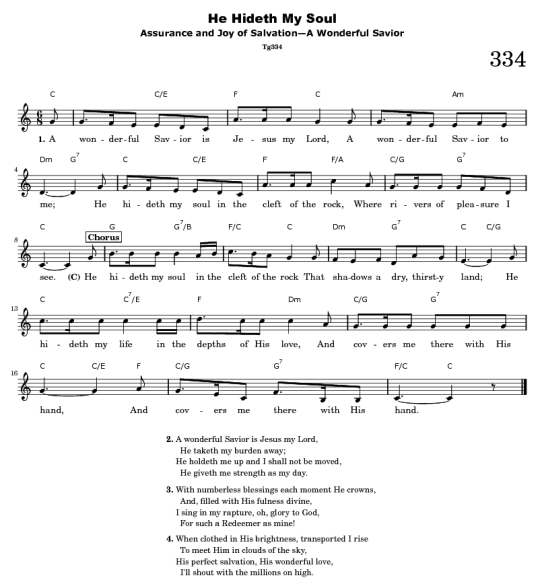 I heard them the other day…

I heard them other day on the radio, singing, "When the Saint's Go Marching In," in ragtime, "When I See the Blood," in boogie woogie. What a disgrace! Do you think a holy God can listen to that and be just, and not judge it? ~ William Branham - THE.HANDWRITING.ON.THE.WALL_ JEFF.IN SUNDAY_ 58-0309M